In a Scary World, Seth Meyers Thinks We Should Have More Fun With Our Kids

"The good news about having kids is they're going to remember your day-to-day focus on them."

Seth Meyers is a funny man. From his long stint on SNL to Late Night With Seth Meyers, the guy more than earns his cred as one of the best joke-writers and joke-tellers around. And yet, his kids don’t always laugh. “They do think I’m funny, ” Meyers tells Fatherly, but then adds a massive caveat. “But my wife is a very serious lawyer and she does exactly as well as I do with our kids in the humor department. And that really rattles the old ego.”

So why don’t kids always think their dads are funny? Meyer thinks the reason is in our perception of our children. He points out that kids are “brutally honest” with their feedback, and that’s where things get tricky. “Like when kids acknowledge that you tried to be funny. That’s really gutting.”

In a quest to entertain his children in new ways, Meyers has written the picture book I’m Not Scared, You’re Scared!, out now from Flamingo Books (Penguin Random House) and illustrated by Rob Sayegh Jr. The book concerns a large bear who is easily frightened of anything and is forced to gradually confront his fears in a series of bonkers hijinks. It’s the sort of picture book perfect for the bedtime of a 3- to 5-year-old, which makes sense for Meyers. He has three kids with his wife Alexi Ashe: Ashe, 5, Axel, 3, and as of September 2021, a new baby, Adelaide.

“I started this book before I knew we were having a third baby,” Meyer says. “But, the motivation behind it was just realizing the relationship your kids have with books, especially books they love. I wanted to throw my hat in the ring, especially with my own kids. Trying to write a book that my kids would like to read; I thought that would be a cool thing to do.” 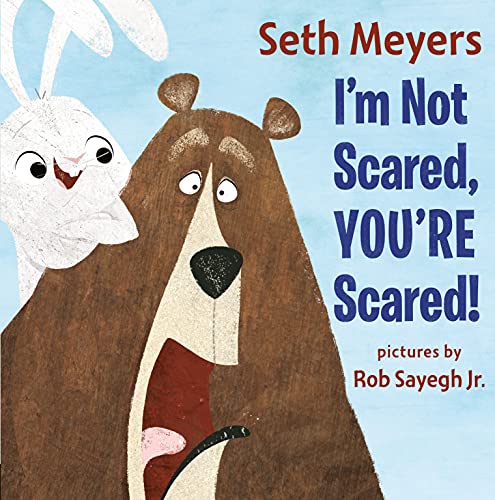 I'm Not Scared, You're Scared

I'm Not Scared, You're Scared

Because the book is specifically about fear, asking Meyers about his specific fear level as a parent felt urgent. As a professional comedian, Meyers helps countless adults manage their fears thanks to the distraction of laughter. But how does he cope with the scary world we live in?

If the Seth Meyers era of Saturday Night Live feels both very recent and a super long time ago, that’s because we’re all getting old. Meyers was a writer on SNL from 2001 to 2014, which, at the time it aired, wasn’t necessarily considered the best era of the show, but now, in very recent hindsight, feels like the freaking golden era. Arguably, this happens to every era of SNL; it gets reassessed once a new era takes over.

“If you’re watching SNL in real-time, it’s just impossible to make 90 good minutes of sketch comedy every week,” Meyers says. “It turns out that people remember the good sketches more than the bad ones. The more distance you put between an era, you just tend to reflect back on the good stuff. I knew as a writer, there was never a better cast than that group of people [Fred Armisen, Bill Hader, Andy Samberg, Kristen Wiig, Maya Rudolph, et al.] and I think their continued success has proved that to be true.”

Ultimately, generational thinking is the name of the game here. Our kids will remember our jokes differently than how we remember our jokes. Fears from one generation morph into the fears of the next. But, managing our fears with fun always helps. That said, when I admit to Meyers that I consider his version of SNL to be my era, he retorts. “Well, then youe era was the best.”

I’m Not Scared, You’re Scared! is out now at major booksellers everywhere.