An off-the-cuff remark from Alfred will send you back to the greatest espionage books of all time.

What did Alfred do before he became a butler? The vast continuity of DC comics will provide you with multiple answers to this question, but the new film The Batman presents a much simpler answer. Before Alfred Pennyworth came to work for Thomas Wayne, he was a character in a John le Carré novel. In one very brief, off-the-cuff remark, the new Alfred (Andy Serkis) seems to insinuate himself into the world of George Smiley and Tinker, Tailor, Soldier Spy. Here’s why this is so cool and why it makes perfect sense. Very mild spoilers ahead for one tiny moment in The Batman.

Early in the film, as Bruce Wayne (Robert Pattinson) and Alfred (Andy Serkis) are trying to crack the case of the Riddler’s (Paul Dano) cipher, Alfred says something very interesting about his time “in the circus.”

Now, this line flies right by, but “the Circus,” was the code name for a fictional version for the British Secret Service in the various novels written by John le Carré, most of which concerned spymaster George Smiley. To be clear “the Circus” as described in le Carré’s novels was not entirely real, and the novelist admitted to inventing much of the spy jargon himself. For example, the term “mole,” as used to describe a spy embedded within another organization was not in wide use until le Carré’s novel Tinker Tailor Soldier Spy. There are a bunch of other pieces of jargon from his books that became standard parlance for mystery and espionage writers, but the concept of “the Circus,” a sort of low-key version of Bond’s MI-6 is probably the idea le Carré is most famous for.

So, surely, the director of The Batman, Matt Reeves, and writer Peter Craig had Alfred reference “the Circus” on purpose. Because of Alfred’s impressive skill set, it makes perfect sense that he would have worked as a spy. But, saying he spent time in “the Circus,” makes him a very specific kind of spy. In the le Carré novels espionage is a patient game of waiting and watching. Codes can often have double meanings in these books, which certainly applies to the events of The Batman.

So, could Alfred have literally worked for George Smiley before working for the Waynes? If The Batman is trying to create a fan fiction connection between the world of Gotham City and the wonderful novels of John le Carré, it may have subtly succeeded. At the very least, even if this writer is off base, one perfect way to follow up watching The Batman would probably be by reading one of John le Carré’s masterpieces. The Spy Who Came in From the Cold is solid if a little sad. But, Tinker Tailor Soldier Spy is an amazing, and perfect book to read on a cool weekend while waiting for Spring.

The Batman is in theaters now. Grab a copy of Tinker Tailor Soldier Spy at your local bookstore, or, right here. 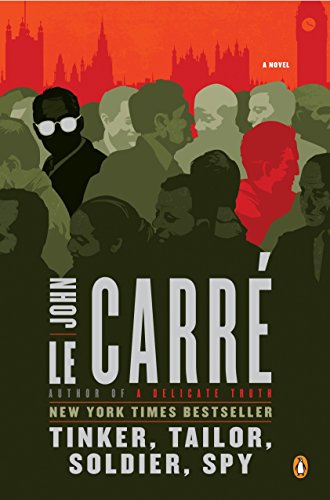 Batman books
ADVERTISEMENT
ADVERTISEMENT
More From Play
Play All Your Questions About the Mystery-Plot of ‘The Batman,’ Answered
Play The 6 Best Batman Shows and Movies That Are Actually Appropriate For Little Kids
Play The Smartest Superhero Movie of 2022 Is Already on HBO Max
Play Every Batman Movie Ranked From Least Kid-Friendly To Most Kid-Friendly
Play 50 Adult Jokes Hidden in Kids’ Cartoons
Play That Crazy ‘Joker’ Ending, Explained