They look fun. They are fun. But they're also dangerous in the wrong hands.

At some point, the sheer bliss that kids experience propelling themselves ahead on scooters loses its luster. As they grow into tweens and then teens, scooters become a means to an end, a quicker way to get to school or the skate park. The classic scooter becomes the station wagon of youth transport: It gets you where you need to go, but sleek and alluring, it’s not. And that’s when your tween is going to start pestering you to buy an electric or motorized scooter. Electric scooters for kids go fast. They look cool. And they’re just mad fun.

What’s not fun? Winding up in the emergency room after a serious collision because the rider wasn’t mature or experienced enough to control his two-wheeler, says Dr. Kirsten Bechtel, an associate professor at the Yale School of Medicine and an attending physician in the pediatric emergency department of Yale-New Haven Children’s Hospital.

Fine, argues Junior. He promises to avoid roads and streets and to stick to pedestrian walkways instead. “If you ride on the sidewalk and hit someone,” says Bechtel “you will injure them.”

But Bechtel lives in our world, and she fully understands the allure of motorized scooters. If you feel your child is trustworthy and responsible enough to handle one, she has a few common-sense recommendations. Number one: No kid under the age of 16 should ride an electric scooter — even though quite a few brands sell electric scooters targeted at much younger children, with correspondingly lower weight limits. We’re not naming any here, because they are not a good idea, period.

“You want an electric scooter that can go slow. If it goes more than 30 miles per hour, and you hit someone, that’s likely a severe injury. The faster you go, the more likely you are to hit someone and the more likely you are to get hurt,” says Bechtel. “The slower the scooter goes [the better], and the fact that you wear a helmet — that’s important. You need more protection around your head. You’re competing with cars.”

When choosing an electric scooter, bear a few things in mind. You or your kid will be hauling it around, so pay attention to both the weight of the scooter and the weight limit for riders; the higher the limit, the longer it will last. Most scooters top out at 220 pounds, but one on our list goes to 250 pounds. Note the miles-per-charge ratio, because that determines how often you’ll have to charge it and for how long. And there’s the consideration of speed: The top speed for most scooters is 20 miles per hour, for safety reasons; we recommend you choose one that’s under that limit to avoid temptation. As for brakes, disc brakes are the best, but they’re also pricey; electric brakes work fine as well. 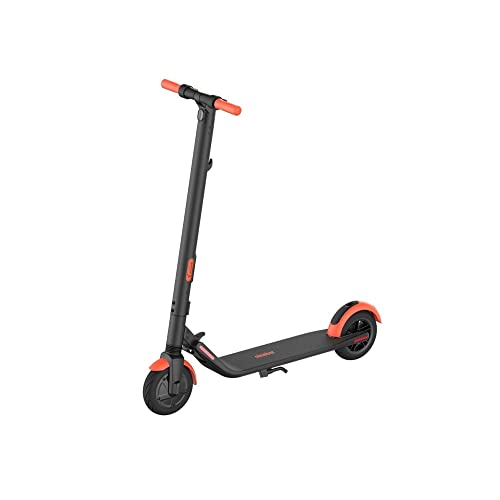 Segway makes a solid starter scooter, with a max speed of 12.4 miles. It weighs only 25 pounds, has front electronic and rear foot brakes, and a 7 percent climbing slope. Meaning, it's better for areas that are flat, with minimal hills. The max rider weight is 220 pounds.

A few reasons we like this electric scooter for your older teens: It has a max speed of 19 miles per hour. It weighs 30 pounds, so it's fairly easy to heft around. It has a double-braking system with a rear disc brake and foot brake, for more control of the ride. Each battery weighs only 5 pounds. You get up to 20 miles of range per charge. The tires are made of solid rubber, so they won't puncture. The max rider weight is 250 pounds, which is a real standout feature given that most scooters have a limit of 220 pounds. Thus, you'll get more use out of it. 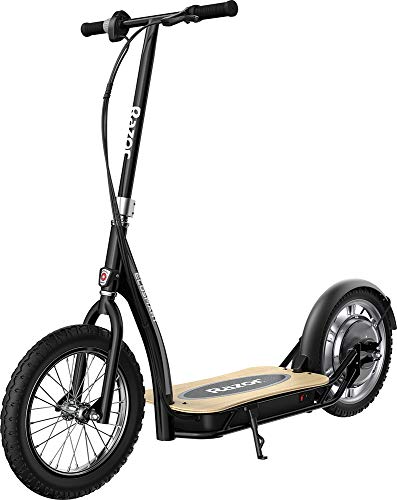 This scooter's 16-inch tires give the rider a smoother, more stable ride, which is nice for beginners. It has a max speed of 15.5 miles per hour, and a range of up to 12 miles. It has a twist-grip hand throttle and hand-operated rear hand brakes. We especially like the wide bamboo deck, which provides stability. This, however, is a heavy scooter, clocking in at 63 pounds, so this isn't something you'll want to tote up any stairs. The weight limit is 220 pounds.

This scooter goes 15.5 miles per hour at its max speed, and clocks about 16 miles per charge. It has a dual braking system (both electronic and rear brake), air-filled tires, and a weight limit of 220 pounds. The scooter itself weighs 26 pounds, so it's about as portable as you can get. And best of all is its smart display, which shows you how fast you're going, how much battery you have left, and your current speed settings.

Every product on Fatherly is independently selected by our editors, writers, and experts. If you click a link on our site and buy something, we may earn an affiliate commission.